These models are the ones which hold traditional securities such as common stock. The Growth models are built to grow your investments through capital appreciation and to move to cash when VAPR determines risk to not be rewarding. The models span the risk tolerance spectrum, seeking to deliver your preferred risk adjusted return. We feel that segmenting our models into market capitalization tranches is the best way to deliver true diversification across asset classes. In an increasingly globally interconnected economy we believe our equity classification allows to properly manage risk.

The equity models invest in ten to twenty individual securities when they are long. The securities are selected based on our proprietary filtration and prioritization of over eight thousand securities. This way we can eliminate securities that we consider to be non-investment quality and create an ordered ranking of those that are. We believe that the benefit of selecting stocks is that we can eliminate drag associated with indexing. 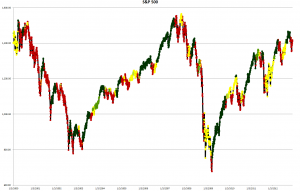 Large Cap: Large Cap invests exclusively in companies that have market value of greater than ten billion dollars. These are often household name companies. This model is the least aggressive in the Growth Series of models, investing with the opportunity for growth but with the stability of mature businesses.

Mid Cap: These are companies that have market values between two and ten billion dollars. The Mid Cap model was built to actively identify the best securities in this classification – looking for strong fundamentals growth and favorable technical signals. The Mid Cap model’s risk like it’s objective is a compromise between the growth prospects of Small Cap and the stability of Large Cap.

Small Cap: Small Cap companies are those with Market Values between five hundred million and two billion dollars. This is the most aggressive Growth model. We specifically tailored filters to not only seek optimized growth, but to weed out illiquid or highly speculative companies.A Smarter Way to Invest does not speculate but rather invests with consideration given to consecutive growth and substantive empirical evidence.